Three men walk into a bar belonging to different nationalities,order for the same drink!

P.S. We have everything in common our thoughts,feelings,choices,the pulse of life and color of blood,yet we discriminate , fight and kill !

Daily Prompt: Fill In the Blank.

Seen a bird flying ! How majestic it looks! The wings spread gracefully  in the air with the  head held high  and the movement elegant than we can imagine.

Aren’t our thoughts similar and exhibit the same pattern of flying if pursued and dwelt into!

Every thought that originates in our mind has its own life and intensity. Depending on the nature of the  thought either it finds its place in the outer world or dies on its own without getting noticed. Some of these are really exquisite,whereas some have selfish desires draped around.

The ones which are nobler if  focused give wonderful and positive results. One has to really ponder hard to execute them in a proper way for perfect results.

Every flight of a thought goes up in the air to seek and touch the highest point but rarely does a thought touches the infinite peak,when it does it is purely pristine and finds its own way into the world of existence.Many end up in flights which even struggle with the early stages of flying,the ones which do not have conviction as its basic strength and which gets lost in the free air of freedom .

Every thought of our mind  has a power stored within its frame,as soon as it is released the thought in shape of a recoil releases certain energy which helps in giving the thought a birth with life in the universe. 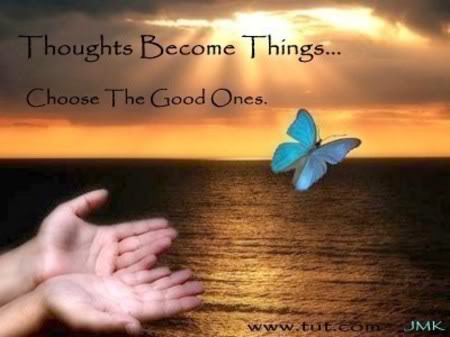 If there is a negative thought and it is as stronger as the positive one,it too releases the same amount of negative energy into the atmosphere thereby harming the person and the ones around him.

That is why ,it is always said to have good thoughts about oneself and others . It is forever advised to be aware of the negative effects of our thoughts,which do have a bad effect on ourselves.

Thoughts are the birds

flying free in the air,

guide them towards the

else they get  hit

on their way and fall off the cliff !